Thieves smash through building to get to ATM 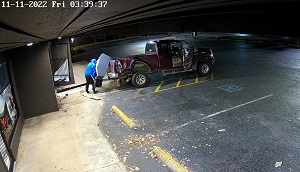 Suspects using a pickup, smashed in the front entrance of a local liquor store to steal an ATM. The incident occurred at approximately 3:40 AM on Friday November 11, 2022, at Liquor Plus located at 508 Eighth St.

Police arrived to find the front door smashed. Video surveillance was obtained which clearly showed a pickup backing into the front entrance three times before the front entrance gave way. The suspects then gathered up the ATM, threw it into the back of their pickup, and drove off in a westerly direction along Eighth St.

The suspect vehicle was a mid-2000’s burgundy colored F-350 that sustained significant damage to the rear quarter panel. The right tail light was busted during the break in.

The two suspects appeared to be Caucasian males. The first suspect wore a black hoodie and dark jeans while the second suspect was wearing a bright blue hoodie, blue ball cap, and black track pants with a white stripe.

The license plate on the vehicle was later reported as stolen and the ATM was located the next day at an undisclosed location, emptied of its content.