Burnaby RCMP’s Drug Section has made a significant seizure of drugs and vehicles, as well as an unregistered restricted handgun, also known as a ghost gun, as part of a months-long drug trafficking investigation.

On September 17, 2021, Burnaby RCMP’s Drug Section, with the assistance of several other Burnaby RCMP units, conducted four search warrants on residences in Burnaby and Vancouver. The warrants were executed simultaneously after a months-long investigation focusing on a Burnaby-based drug trafficking organization.

The investigation led to the seizure of an unregistered restricted handgun, which is also known as a ghost gun, with ammunition. The seizure is significant because the untraceable nature of the gun components, which do not have serial numbers.

Investigators also seized the following drugs from the four residences:

As well as thousands of counterfeit prescription pills, such as: 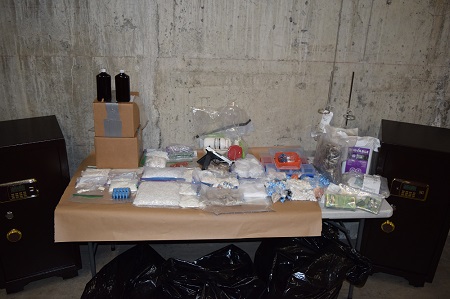 The actual contents of the seized pills will be analyzed.

Some of the drugs were stored in large safes inside a residence that is believed to have been operating as a stash-house for a dial-a-dope operation.

Three people were arrested and charges will be forwarded to the Public Prosecution Service of Canada.

The seizure of an untraceable gun is significant, as these individuals are associated to figures involved in the Lower Mainland gang conflict, said Corporal Mike Kalanj of the Burnaby RCMP. This enforcement action is a major disruption to this criminal organization and has the potential to disrupt drug operations across the Lower Mainland.