Burnaby RCMP is appealing for witnesses and urging residents to keep properties tidy after a suspicious fire that left damage to a home and shed.

Nobody was injured after a small fire broke out in the backyard of a home on Kitchener Street near Kensington Avenue around 4 a.m. on Tuesday, July 6.

It’s believed the fire was started intentionally, using an accelerant. The motive is unknown. There have been no similar cases in the area recently.

The homeowner was alerted to the fire through a smoke alarm and was able to get it extinguished quickly, leaving minimal damage.

This was a close call that could have been much worse if the fire had burned for just a few more minutes. It is also fortunate the fire didn’t spread any further, given the hot weather has dried out the grass on many properties in Metro Vancouver, said Cpl. Brett Cunningham with the Burnaby RCMP.

This is a good reminder for all residents to make sure their yards are clear from debris, construction materials, or other belongings that could increase damage if there is a fire over the summer months, Cunningham added.

Residents are also urged to trim overgrown trees and hedges near homes to cut down on fire risk.

Burnaby RCMP is working with the Burnaby Fire Department on the investigation. A video canvass has been done in the neighbourhood, but so far no suspects have been identified.

We are asking people to be vigilant and report anything suspicious to police as the investigation continues, Cunningham said. 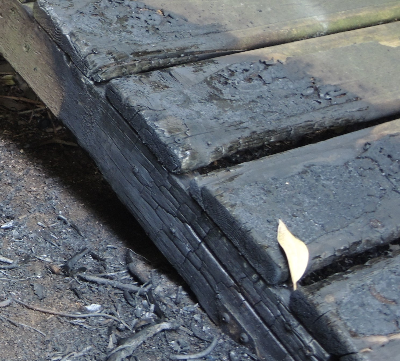