After assisting a woman in distress, Burnaby RCMP discovered a massive drug operation in a residence in North Burnaby.

On November 29th, 2020, just before 10:30 p.m., Burnaby RCMP frontline officers responded to a 911 call from a woman in distress. Officers located her in a residence near Dundas Street and Delta Avenue.

Police confirmed the woman’s well-being and made sure she was safe.

Officers entered the residence to assist an unresponsive man still inside. The unresponsive man was located, along with a large scale illicit drug operation which included a number of containers of unknown chemicals. The man was assessed by paramedics and transported to a local hospital. The man was released from police custody at the hospital, pending the outcome of the investigation.

Paraphernalia associated to drug use was located inside the residence.

Further investigation revealed that the residence was licenced as a legal cannabis growing operation, however it was 500 plants over the limit authorized by the licence. The Burnaby Drug Section executed a search warrant at the residence and the following quantities of illegal drugs, cash and weapons were seized: 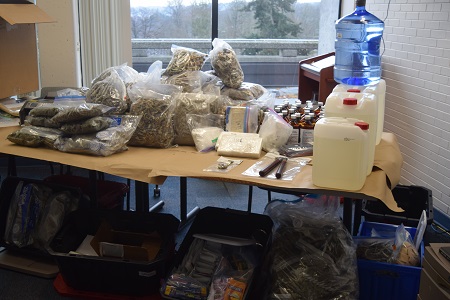 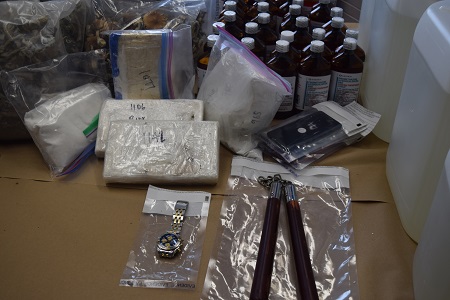 The owner has been linked to gangs and charges are being sought under the Controlled Drugs and Substances Act.

The amount of dangerous drugs this seizure has kept off our streets is staggering, says Inspector Matt Toews, Officer-in-Charge of Investigative Services at Burnaby RCMP. With the number of overdoses we are seeing lately, this is a huge victory for public safety in the City of Burnaby and the Lower Mainland.