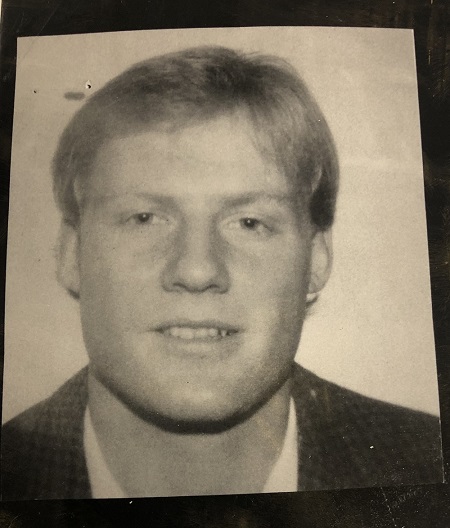 While many people who are reported missing to police are thankfully located, there are some who sadly are not. In the coming weeks, Burnaby RCMP’s Missing Person Unit will be highlighting a number of investigations where we need your help in locating missing people.

The first investigation being highlighted is from 1984 and involves missing Burnaby man, David Campbell.

36 years ago today, on October 29, 1984, David Campbell, a 21-year-old, second year student at SFU was reported missing by a family member. Campbell had last been seen by friends at a party at SFU on October 26, 1984.

On the evening of October 26, 1984, Campbell was with friends, drinking alcohol at a student residence in Louis Riel House on the SFU campus. At one point, Campbell and a friend went to a liquor store to pick up more alcohol and made their way back to the student residence separately. According to this friend, when Campbell returned, he had changed his clothes and was wearing a straw hat and suspenders. His friend believed Campbell was dressing up as a farmer for a Halloween party they were planning on attending afterwards.

At 9 p.m., they walked to the Halloween party on campus which was approximately 100 yards from the residence they had been drinking in. According to Campbell’s friends, once they were inside they split up and did not see him again.

Campbell was reported missing on October 29 and a missing person investigation has been open since then.

In the days after Campbell was reported missing, Burnaby RCMP investigators interviewed friends and family members but were unable to locate anything that would provide investigators with a lead where Campbell may have gone. Police and volunteers also conducted searches of Burnaby Mountain to no avail.

In 1987, Burnaby RCMP received some information that we are re-releasing today in the hope that someone who knows something about Campbell’s disappearance may come forward.

On March 30, 1987, police received an anonymous letter. In the letter the person said they had observed Campbell at the Halloween party, speaking with two Asian females who were approximately 20-years-old. The two females appeared to be annoyed with Campbell. According to the letter writer, Campbell was then escorted out of the party by three to four Asian men. Despite continued investigation, none of the people described in the letter have been located.

Regardless of how long someone has been missing, we always continue to search for new leads, says Corporal Robynn Watts, Burnaby RCMP’s Missing Person Coordinator. If you know of anyone who may have information that can help us in our search for David Campbell, please reach out.