On August 15, 2019, Statistics Canada published the 2nd quarter findings regarding cannabis use and related behaviours among Canadians, 15 and older. Link to infographic here.

Some interesting findings were:

- Despite legalization, 4 in 10 cannabis users say they bought cannabis illegally.
- 16% of Canadians over 15 years old used pot in the last 3 months.
- Smoking the drug remains the most common way of consuming it.
- Around 77% of Canadians reportedly consumed dry cannabis while 26% consumed edibles.
- Other reported ways of consuming cannabis were as liquid concentrates (20%), cannabis oil cartridges or vape pens (19%) and derivative extracts (12%).

How does this relate to our community? Well…

This year, in an ongoing investigation that started in June, the Burnaby RCMP’s frontline officers, Drug investigators, City of Burnaby bylaw officers and provincial agencies worked hard to shut down and seized (pursuant to the Cannabis Control and Licensing Act) massive quantities of cannabis & derivatives, assorted paraphernalia and cash from what is believed to be an illegal dispensary operation on Imperial Street near Royal Oak Avenue. This was largely made possible because of the information and assistance we received from concerned members of our community. 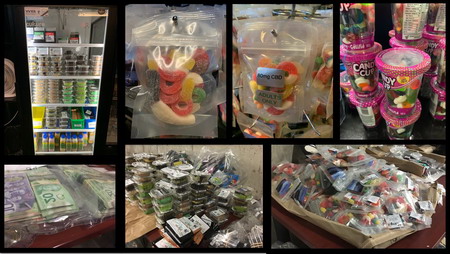 The Burnaby RCMP was particularly concerned given numerous reports of youths frequenting and possibly obtaining cannabis from the site. During the search, shockingly large quantities of cannabis products, including edibles, were located. Edibles are still illegal in Canada and can pose serious health risks to consumers given unregulated dosage, possible contamination by unknown substances, and their inherent appeal to children.

"Yes, cannabis is legal, but getting cannabis products illegally can be dangerous. You also don’t know where all that money is going" said Constable Peter Byun, the lead investigator.

Please be mindful if and when you’re getting cannabis... make sure it comes from a safe and legal source.