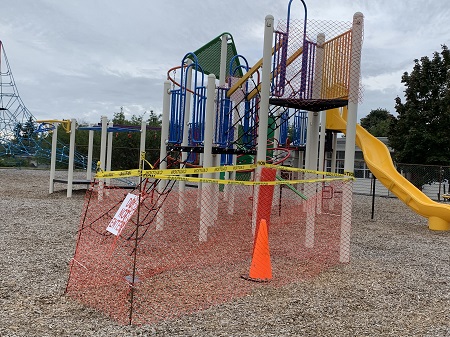 In late September, Burnaby RCMP asked for the public’s help in locating a blue slide that had been stolen from Suncrest Elementary School in Burnaby. A groundskeeper had noticed that the slide, estimated to be valued at $5,000, was missing and reported it to police.

After the public appeal, police received a tip from the public about the location of the slide and Burnaby Youth Section took over the investigation. After significant investigative work, a warrant was approved and executed by Burnaby Youth Section at a residence near the school. The slide was located at this residence, but unfortunately, the slide had been damaged and will not be suitable for use in the playground.

Our investigation into how the slide came into the homeowner’s possession is continuing and no charges have been laid at this time.

We are aware of the impact that this theft had on children and families in our community so the fact that the slide can no longer be used is not the result we wanted, says Corporal Mike Kalanj with Burnaby RCMP. We are thankful for the community support in this theft investigation which is ongoing.