Kelowna RCMP mourning the loss of one of its own

The Central Okanagan lost a protector last night, when PSD Fitz passed away unexpectedly. Fitz started showing symptoms of illness and was taken to the veterinary hospital where he was diagnosed with an aggressive cancer. He passed away on Wednesday night. 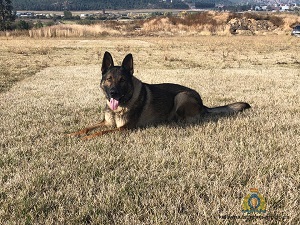 View Larger Image: photograph of PDS Fitz laying in a field with his tongue out

Fitz started his RCMP career in Kelowna in 2015 and remained on duty until the time of his death. At the time of his passing, he was 7-years-old. He and his handlers were tasked with a variety of duties including tracking and finding persons, evidence and drug searches, and the apprehension of suspects.

Fitz was a beloved and valuable member of our Police Dog Services unit and played an important role in making the Central Okanagan a safer place, says Supt. Kara Triance, Officer-In-Charge of the Kelowna RCMP. He will be sorely missed, by all his co-workers and no doubt the Kelowna community.