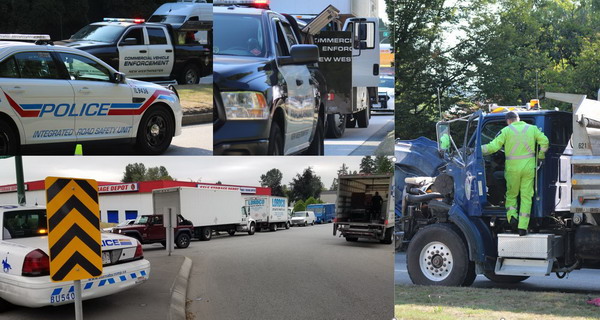 Over the past four days the Burnaby RCMP Traffic Unit along with various policing partners from the lower mainland have conducted numerous commercial vehicle safety checks on Burnaby roadways. These checks have made a significant impact on the safety of our roads.

The priority of this initiative was commercial vehicle enforcement which included checking for proper documentation, ensuring loads are secure and assessing the mechanical condition of commercial vehicles. Officers also checked for sobriety and other Motor Vehicle Act offences.

This morning a driver was stopped and found to be impaired by alcohol in addition to be being prohibited from driving. The driver was charged with driving while prohibited, issued a 24-hour licence suspension and his vehicle was impounded for seven days.

Over the past four days a total of 179 inspections were completed with 58 of those vehicles being identified as unsafe and removed from the roadway. Of the 179 vehicles that were inspected, 277 mechanical defects were identified. In total, 178 violation tickets were issued under the Motor Vehicle Act for insecure load, defective vehicle and distracted driving violations.

This initiative has made a significant impact on the safety of motorists not only on Burnaby Streets, but on roadways throughout the Lower Mainland, as many of these vehicles are just passing through Burnaby says Sergeant Dwayne Beckerleg of the Burnaby RCMP Traffic Unit. It is part of a larger effort by policing agencies targeting the safety of all vehicles using the public roadways.